Inauguration of a second production line 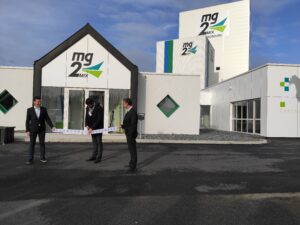 After celebrating its 30th anniversary, on the sidelines of the 2019 edition of Space, MG2MIX, a specialist in consulting and manufacturing of multi-species premixes, announces a turnover of €45.5 million by the end of 2019, with a staff of 47 employees. In order to meet the demand of its customers in France and abroad, the company inaugurates in January 2020, a second production tower on its historical site of Châteaubourg. Back on the success story of MG2MIX and its new perspectives.

A continuous growth since its creation in 1989, with an evolution of +10% over the last 10 years.

Launched by Maurice GETAIN and Gérard MAIGNAN, two technicians in animal nutrition, the company focuses on consulting and the manufacture of premixes for feed manufacturers. In 1992, the company invested in a production tool and manufactured 250 T premixes/month. The founders rely on research and innovation to differentiate themselves, in partnership with major technical institutes, feed manufacturers, breeders and veterinarians, up to the creation of their own research farms. These experimentation centres make it possible to offer personalised solutions, tested according to the needs of their customers.
In 2003, MG2MIX is deployed internationally and opens a production site in Algeria 10 years later. At the end of 2015, the leaders hand over the reins to the six executives of the company. The latter accentuate their efforts towards export, which today represents 60% of the production. MG2MIX is currently present in more than 38 countries around the world. Last September, the company celebrated its 30th anniversary with a more than positive balance sheet. It was an opportunity to look back on the expansion of the offices and the production site for a global investment of 8 M€.

2020: inauguration of a second production line
The company produced 32,000 T of premix last year (equivalent to 4.4 MT of reconstituted feed). Thanks to the work of the nutritional engineers, the 8 MG2MIX research farms and the customer requests that push the teams towards excellence, the catalogue of solutions is growing every year. The company is recognized in France and abroad for its ability to respond quickly to requests for tailor-made solutions, thanks to the quality of the raw materials used and a demanding control. In order to maintain its lead, the firm has undertaken the construction of a new 1500 m2 storage and manufacturing space, with a second tower aimed at doubling its production capacity. The total production space is now 5000 m2.